Posted on December 2, 2012 by DoreensRecipes

When gathering with my family I almost always make a batch of whoopie pies.  My sister and I have fond memories of them as kids.  (Wikipedia on Whoopie Pies) 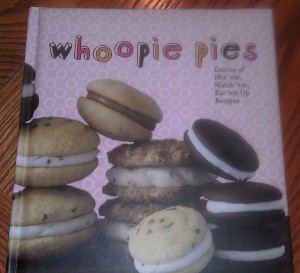 This year I brought along a Whoopie Pie cookbook, named appropriately “Whoopie Pies”.  (Here’s the Amazon link to the book:  http://www.amazon.com/Whoopie-Pies-Dozens-Match-Recipes/dp/0811874540) that I had found last year in an upscale kitchen store.  I hadn’t yet gotten the chance to try some of the different variations of whoopie pie recipes in the book until this trip.

It turned into a Whoopie Pie Palooza!  I’ve never made some many whoopie pies.  I may have gotten a little obsessed.

The cookbook organizes whoopie pie recipes into two sections:  the cookies and the fillings.  So you can mix and match.

Before embarking on new recipes I first made a batch of the classic ones from the original recipe that my mom clipped from the Brockton (MA) paper.   We love those. They got gobbled up in two days.

Next, since we were serving a lot of soups over the next several days, I made a batch of cornbread whoopie pies with cream cheese/sour cream filling.  The exact recipe in the cookbook said:  “Jalapeño Cornbread Whoopie” for the outer cookie and “Bacon-Chive Goat Cheese” for the filling. The Jalapeño Cornbread Whoopie recipe suggested substituting cheddar cheese for the jalapeño which sounded more yummy to me.  And I wasn’t too interested in goat cheese (inexperienced with it) so I substituted sour cream there, which made the filling too runny when not refrigerated.

These got the thumbs up although we found them a little heavy in the normal whoopie pie size.  They’d make great little mouth popping appetizers if you made the pies really small.

But then I made the mistake of telling my sis and bro-in-law how I had adapted the original recipe.  They were shocked, appalled.  Skipped the jalapeño?  How could I?  Not use goat cheese!  Was I crazy?  I was thereby ordered to make another batch following the recipe exactly.

I always follow orders.  After another trip to the grocery store, I made these again, following the recipe more closely.  These too were a hit.  Again, kinda heavy.  I tried making them small and that’s actually hard.   Need to figure out a way to squirt small amounts on the cookie sheet.

The other recipes that intrigued me from the book were a “Red Velvet Whoopie” cookie, a “Chocolate Buttercream” filling and a “Strawberry Buttercream” filling.  Under the heading you can never have too much chocolate, I made these recipes.  (insert links)

Turns out you can have too much chocolate.  The  Red Velvet Whoopie recipe produced a dense cookie.  There is a note 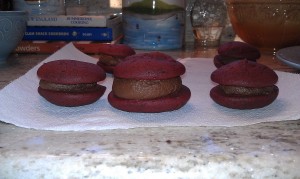 from the authors that one of them likes to add more cocoa then the other and I stuck with the heavy cocoa quantity so that’s probably why the cakes were dense.

The chocolate buttercream recipe was disappointing, I think because it called for powdered cocoa, not melted chocolate.  And since with the cream filling, you don’t cook it, the powder consistency stayed with the filling.  It too was dense and grainy-like with a heavy chocolate flavor.  Putting the two together was just too much.  We ate about half that batch.  I did like the Strawberry Buttercream but couldn’t find the freeze-dried strawberries so used frozen ones and it made the filling runny.

The family requested I stop messing around with the Whoope Pie cookbook and go back to the “right” way to make whoopie pies.   But I wasn’t quite done fooling around yet. 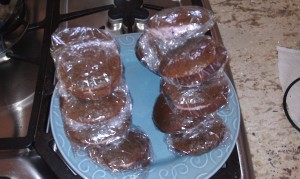 Wow!  Happy explosion in the mouth   This batch of whoopie pies went fast.  I don’t know if these fillings are new family favorites that have to be done every year, but they were good.

So I will stick with the tried and true classic recipe, then think of creative ways to add some pizzazz to the filling.

Yet, there are some other intriguing recipes in this book.  Maybe next year.