Posted on December 24, 2022 by DoreensRecipes

Cooked for Mom and I December 2022 and it was yummy!

Posted on March 7, 2021 by DoreensRecipes

We had an abundance of ripe bananas in the freezer and a lack of cookies in the cabinet.

Posted on November 30, 2020 by DoreensRecipes

Joao Gonsalves was born on 6 September 1889 in the town of Tabua in the District of Ponta do Sol, Madeira on 6 September 1889. The son of Joao Goncalves and Francisca de Jesus Goncalves, reportedly a second wife and had probably at least two sisters. In the early 1960s, he would often have Maurice Soares write letters and include money for one of his sisters in Madeira. There is also another relative, a nephew named Anibal.

He lived in a boarding house in Easton, MA working at a job he didn’t like.

According to her birth certificate Maria Correia was born in Lombo de Sao Joao, a town in the District of Ponta do Sol, Madeira on 10 October 1894, the oldest daughter of Manuel Correia and Carolina Augusta da Luz d’Aleixo Correia. Her paternal grandparents were Antonio Corriea and Francisca d’Abreu Correia, while her maternal grandparents were Jose d’Abreu d’Aleixo and Maria de Jesus d’Aleixo. All other paperwork indicates a birthdate of 9 October 1894.

She is known to have at least one brother Manuel, Jr. and three sisters (Matilda Sargo, Isabel Santos and Carolina Correia). Another brother was married to a Vincencia and had 2 sons and 2 daughters. After he died young (35+/-) from a fall off a terrace, his family lived in a very small house near Carolina. Vincencia took care of Carolina until she died at the age of 93.

Apparently Maria’s family wanted to separate her from a boyfriend who was too poor; so her father accompanied her to Easton. They settled at the same boarding house as Joao Gonsalves. According to documents held by John G Jr., they traveled on a ship named the Madonna arriving in Providence, RI on 5/3/1913. She applied for naturalization in 1961 but was denied because no ship of that name arrived and they could not prove legal immigration. In looking at Providence shipping records online, a ship name Venezia did arrive on that date but I could not find a passenger list for that voyage.

Joao and Maria were married at the Immaculate Conception Church on 10/18/1913. Mary Texeira said her mother told her that at first the only furniture they had was a chair.

The general consensus is that there was a baby boy who was stillborn sometime afterward.

John Gonsalves, Jr. said at one time his father John G. Sr. showed him the house where he was born in Stoughton on 12/27/1915. It was a row house facing the railroad tracks on Morton Square.

According to Virginia Sargo O’Connell, in 1917 her mother Matilda Correia came from Madeira to live in an 8-room house on Clapp Street where Joao and Maria lived taking in boarders. She went to work at Stoughton Rubber (the site of the former Corcoran Shoe) where she met her husband Manuel Sargo.

Sometime afterward Joao and Maria moved to the small house at 1170 Central Street where they continued to take in boarders including the Sargos and Andrades. Mary Melo was born in this house on 11/5/1920. It’s unknown when the Sargos moved to their home on Thomas Street.

There is a question over the death of another baby. Maria talked of a baby dying in bed. Our family assumed sudden infant death syndrome or suffocation. However, according to Isabel, the baby died as a result of the Spanish Influenza Pandemic, possibly in bed. Isabel indicated when Maria went to the doctor for the baby, he was more concerned about Maria’s health as she also was seriously ill with the flu.

Reportedly, a baby was buried at Holy Sepulchre Cemetery in Stoughton that needed to be moved because the cemetery was expanding, however they couldn’t afford a stone so the baby is in an unmarked grave. The cemetery has a record of Joseph Gonsalves who was born 10/5/1919 and died on 1/5/1920 at 1170 Central Street. There was no indication of a location of a grave. This supports Mary’s story that the first stillborn baby was (John or Manuel) and the second baby that died was Joseph.

Manuel Correia Sr. continued to live in Stoughton, however, he wrote to his family that Maria and Joao were treating him badly and Maria’s family blamed her. He eventually decided to return to Madeira. Maria felt it was a good thing for her family to find out about how he really was as it appears that he was suffering from depression or some type of mental illness.

During prohibition Joao made and sold whiskey, but he was advised to be careful as he could be arrested. They decided to move to New Haven, CT, where Elizabeth (“Betty”) was born 12/10/1920. According to her obituary in the newspaper she had lived in Stoughton since the age of 2 (1922). Their son Joseph James was born in Stoughton in 1923. In 1934 they began to build the house at 1158 Central Street, as can be seen in the background of the family photograph taken in October of 1934.

Maria’s brother Manuel was married to Elisa but had no children. While she returned to Madeira for a lengthy visit, Manuel moved to California with Elisa’s sister Julia, who then had 3 sons and a daughter. Eventually Elisa joined them in California. At some unknown date Manuel committed suicide. His oldest son, also Manuel Correia, maintained contact with the Sargo family over the years. He eventually married a Delores Peters, whose family had also moved from Stoughton to California.

On 7/4/1959 Joao Gonsalves returned to Madeira for an 8-week visit returning home by way of Montreal, Canada on 8/25/1959. On 7/1/1959 he signed a power of attorney which indicated he had brown eyes, however they were blue. Maria never wanted to return to all those steep hills.

While Maria spent nearly her entire marriage as a housewife, Joao spent his life as a laborer at various companies. At some point while he was chopping wood at home, a metal sliver broke off the wedge and entered his eye and required the removal of his eye and replacement with a glass eye. He worked at the Plymouth Rubber until he was 76 in 1965, when rules were put in place requiring anyone 65 or older to retire. He died on 11/7/1966 when hit by an automobile while crossing Central Street on his way home. Maria died on the Feast of the Assumption 8/15/1972 of a heart attack.

The above information is a synthesis of information/stories handed down through our parents and relatives, with review by Isabel Hinchliffe, Teresa McGrath and Virginia O’Connell, together with whatever documentation I have been able to find to date including that maintained by John Gonsalves, Jr. (November 15, 2016 by Eileen Soares)

Posted on November 23, 2020 by DoreensRecipes
Posted in Main Dishes, Uncategorized | Comments Off on Herb, Garlic and Lemon Roast Chicken Thighs

Posted on November 22, 2020 by DoreensRecipes
Posted in Uncategorized | Comments Off on Bailey’s Cream Whoopie Pie Filling

Posted on January 14, 2020 by DoreensRecipes

Yesterday I took a day off from my volunteer job. It was cold in Seattle, with snow and hail, so a good day to hang out in a warm kitchen.

I planned to make four recipes: Two desserts and two main dish ones. The desserts were driven by the need to do something with the left overs from the Radical Women Fabulous Feminist Bake Sale: Ginger cookies and 12 cups of chocolate chips. The main dish ideas came from the need to have some food to eat the rest of the week.

After a brief trip to the grocery store for some of the ingredients that weren’t already in the kitchen, I spent a fun day baking and cooking.  All the dishes came out very good. 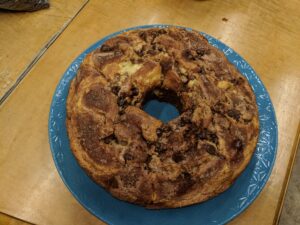 The Sour Cream Chocolate Chip Coffee Cake recipe came from a site called loveandoliveoil.com, which I found because we also had an abundance of sour cream in the frig.  The cinnamon and the chocolate chips made a good combination.

The Cheesecake recipe came from thespurceeats.com, 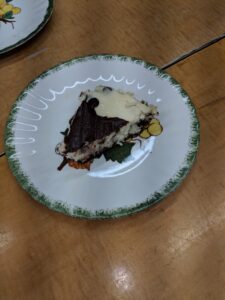 a site I signed up with a while ago.  I like their baking recipes and they print out nicely.  The cheesecake came out nice and firm using a glass pie dish. It was rich, we only needed to eat a small piece to enjoy. The crust was made from the leftover ginger cookies and the taste of the ginger worked well the the cream cheese and the chocolate. 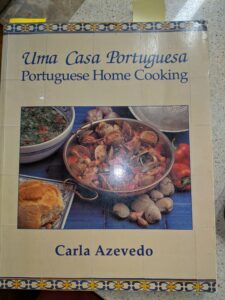 I used a dark winter beer for the sauce and with the cloves and allspice, gave it a strong, different, yummy flavor.

The Tuscan Vegetable Soup recipe came from a Food Network email.  It was easy to make and has a clean simple taste.

Will post recipes and add the links here later.

Posted in Uncategorized | Comments Off on Day of cooking

Posted on December 23, 2017 by DoreensRecipes

Also from Sunday Parade magazine article on holiday cookies.  Putting the recipe in the blog first, then trying it.  I figure typing it up will make me read it more carefully. 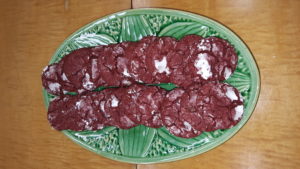 Postscript:  They came out great.  Like better than the pinwheels.

Posted in Desserts | Comments Off on Red Velvet Crackle Cookies

Posted on December 23, 2017 by DoreensRecipes

My roommate and I saw an article with a series of holiday cookies recipes in a Sunday Parade magazine article.   Gave this one a try; I liked the results but found the preparation annoying.  See my experience (and impatience) in the steps of the recipe.  Going to try another recipe today from same article. 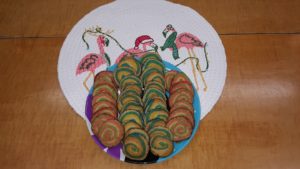 Posted in Uncategorized | Comments Off on Holiday Pinwheel Sugar Cookies

Posted on December 3, 2017 by DoreensRecipes

I saw this in the New York Times last Thursday and was able to make it tonight.  It has some of my favorite combinations (tomatoes and basil) plus is a one-dish meal:  chicken and potatoes.  Okay, there should be some veggies other than potatoes and tomatoes.  But close.

Easy to prepare.  Took a lot longer to cook then recipe said;  added my time in instructions.  I think I packed the pan too full. 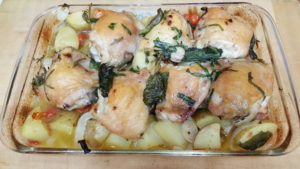 Posted in Main Dishes, Uncategorized | Comments Off on Chicken Baked with Potatoes, Cherry Tomatoes and Herbs

Posted on November 26, 2017 by DoreensRecipes

Looking for leftover turkey recipes I received an email from NY Times with just the thing:  25 recipes for left over turkey.  Gave this recipe a try, and it was yummy.  Especially served over reheated leftover biscuits.

Here’s the link to all 25 recipes.

NY Times notes that it is a forgiving recipe, so this version includes my adaptations, based on what we had in the frig.