Posted on December 27, 2012 by DoreensRecipes

First, a review of the equipment. 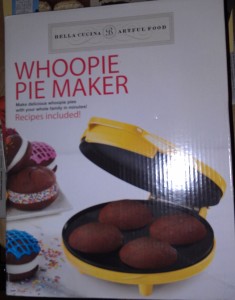 The Whoopie Pie oven is out.  It is in the basement for the next rummage sale.

First, it only makes 4 whoopie pie cakes at a time, an obvious draw back.  But then the instructions tell you that it will smell bad and taste bad the first couple of times you use it.  So don’t eat those cakes, throw them out.  It says this right in the instructions.  Evidently you have to burn off something or other.  Great intro to the product.

It also doesn’t have an on or off button, so when you plug it in it heats up and the only way to turn it off is to unplug it.

And the entire thing gets hot, so you have to use hot pads to handle it.

I tried a couple of runs with it and then washed it up and sent it packing to the basement.

Thank you to the friend that bought it for me.  So nice.  But, not really a useful thing!

Next I used the whoopie pie pans.  Much better results.  I started with the the traditional recipe I always use.  Then did a 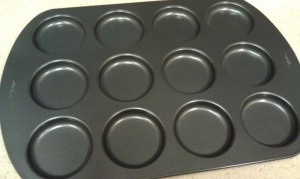 batch of Chocolate Chip whoopie pie cakes.  (I had bought some red and green chips so they they were holiday colored.)

Review:  While the pans worked well, they did make big whoopie pies.  Up side was they got done fast because I only made 24 pies. 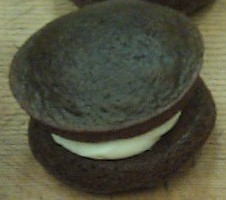 Here’s a chocolate one.

The next night I made vegan whoopie pies for my vegan friends.  This time a vanilla cake and a chocolate inside.

Still had trouble with the insides being runny and dripping out the sides of the cakes.  I think it’s a problem with the non-dairy butter substitute.  Or the lack of marshmallow fluff!  Which is not vegan.  I checked.  It has egg whites.

Next, since some of the recipients are also allergic to chocolate, I made some pumpkin/cream cheese whoopies.  I used the pumpkin cake recipes from the first whoopie pie cook book I bought, “Whoopie Pies”. 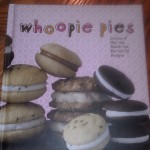 Unfortunately this recipe was dense and created little football shaped cakes.  Did not use the whoopie pie pans, just did the drop-spoon method.  I have an another pumpkin recipe in my paper files and it was much better.  Tasted good though.

As I was rummaging around the cabinet for baking supplies I found a can of blueberry pie filling.  And since the pumpkin whoopie pies uses a can of pumpkin pie filling…hmmm, a way to make blueberry whoopie pie cakes.  My favorite food, blueberries.

So I made batch #5 of the week with the blueberry pie filling.  Unfortunately, that batter came out rather gray.  So I added some blue food dye, which made them look better if not a little weird.

These were wetter and so came out a little better.  Used the cream cheese filling for these as well.  Here’s pics of how they turned out: 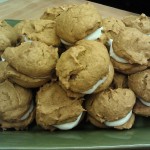 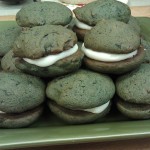 Plate of the blueberry whoopie pies with cream cheese filling

After sharing all of these with friends here’s the rankings/evaluations:

This entry was posted in Desserts, Whoopie Pies. Bookmark the permalink.
Loading Comments...